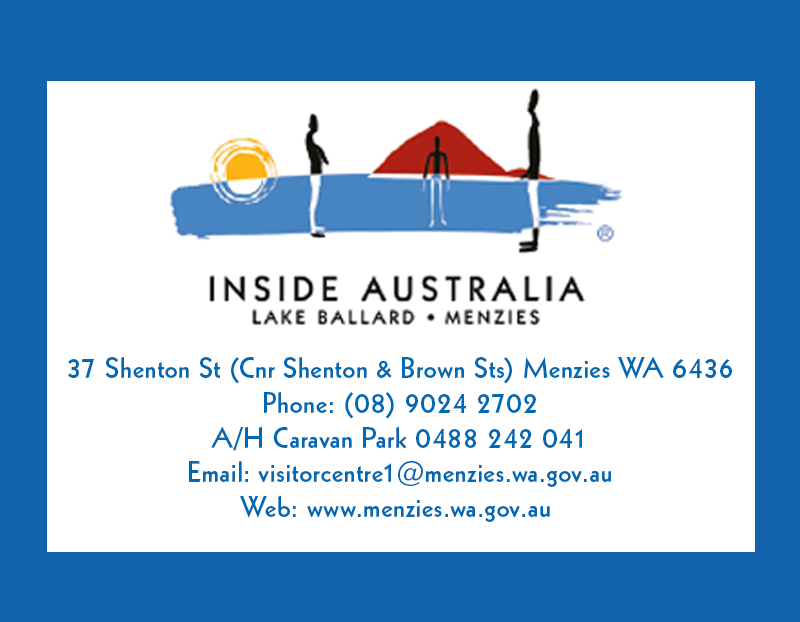 The Menzies Community Resource Centre and Visitor Centre is the central hub of the community and endeavours to keep the community up to date with information and technology.

Visitors to the region are welcome to call in and take a guided look around or visit the Menzies Visitor Information Centre history room to discover more about Menzies. Pamphlets, brochures, guide books and maps, together with souvenirs, are available from the Visitors Centre.

History of The Once-Thriving Community in the Northern Goldfields

Menzies is a mining and pastoral shire in the Northern Goldfields, 730km northeast of Perth and 132km north of Kalgoorlie. It’s not a large town and doesn’t appear in the news often, but this was not always the case.

Like many towns in Western Australia, it was born in and boomed during the gold rush days of the 1890s. Following the pattern that has become typical of many gold mining towns, the limit of available resources was reached. The people drifted away, and the area declined. Despite these changing fortunes, Menzies continued to survive.

The first gold discovery in the Menzies area has been credited to a prospecting party led by James Speakman in 1891. His find was reported, but for some unknown reason, Speakman did not return to the area. Menzies was proclaimed a Municipality on 20 December 1895. The first Council was elected on 20 January 1896, with H Gregory elected as Chairman.

In common with many of the towns in the North Coolgardie Goldfields, these early residents had to endure heat, flies, lack of water, poor diets and limited transportation, often for little or no reward. Sickness and disease plagued the early inhabitants, claiming many lives, especially among the young. The materials used to build the early buildings were an extreme fire hazard, and fires took a heavy toll.

Despite all these hardships, the people strived to make Menzies a vibrant, profitable town. However, this prosperity was not to last. The gold that had made Menzies a town of significant importance at the turn of the century became more elusive a decade later.

From around 1905, the gold mining industry experienced a downturn, and most of these towns disappeared. Menzies has survived but is just a shadow of its former self. The pub at Kookynie is the only reminder of a once-thriving community.

What You Can Expect When You’re Staying in Menzies

The Shire Council Chambers and Administration Offices are housed in the historic Town Hall building and clock tower. We also operate a clean, modern caravan park with powered or unpowered sites and a fully equipped camper’s kitchen. Dogs on leads are most welcome.

There is an unmanned Eagle Petroleum fuel station with petrol and diesel available by a Credit Card payment facility 24 hours a day, seven (7) days a week.

The Menzies Hotel provides cold refreshments, meals and accommodation. Daily papers and basic supplies are available from the Hotel Store. Menzies also boasts the Achievable Outback Café as one of the drawcards of the town.

Our community school caters for students from Menzies, and a daily school bus service services the outlying township of Kookynie. Students are educated to Year 9, and senior students are assisted with Distance Education for Years 10 to 12.

The Menzies Health Centre is open three (3) days per week with a registered nurse and part-time nursing aide. Scheduled monthly RFDS surgery and visiting specialists provide healthcare to the Menzies community and district.

If you’re planning on driving by the area, these are Menzies top attractions that have survived after the area declined:

Visit Menzies Visitor Centre’s business page here and get to learn more about them now!

What To Expect in Leonora Tourist Information Centre

Leonora Tourist Information Centre is the service centre for ..

What To Expect in Leonora Tourist Information Centre

Leonora Tourist Information Centre is the service centre for ..

The Great Beyond Visitor Centre is an information centre that ..

If you’re visiting or passing through the historic northern Goldfields, ..

If you’re visiting or passing through the historic northern Goldfields, ..

A Look Inside This Must-Visit Laverton Visitor Information Centre

If you’re travelling to the Shire of Laverton, you should stop ..

Discover How Local Search Wins You Business  10th May 2019

How Can Beacon Technology Help You?  7th February 2019

Back to all posts